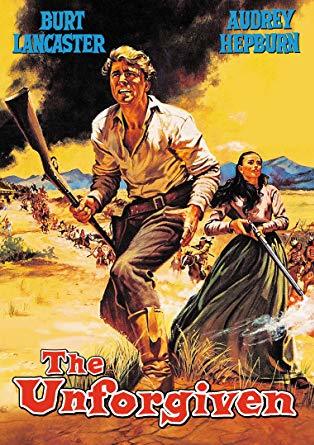 The Unforgiven is a 1960 Western film directed by John Huston. The story is based upon the 1957 novel by Alan Le May, and the picture was shot in the state of Durango, Mexico.

Indian by birth, but secretly adopted by whites, Rachel Zachary (Audrey Hepburn) soon becomes the target of lawless racism and brutality when her true identity is revealed. The Kiowa Natives want her back, the local whites want her dead, and her only hope for survival is Ben (Burt Lancaster), who must face the most terrifying fight of his life to save the woman he loves.

Not to be confused with the later Western film Unforgiven, which tells another story entirely.

The Unforgiven provides examples of: