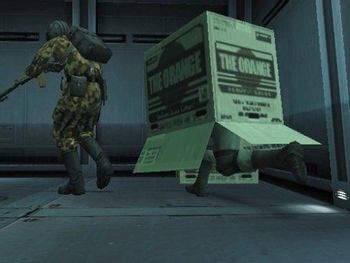 "Take care of the box, and it'll take care of you..."
"I would first go to my old thieving standby: dress up like a bush."
— Strong Bad, Strong Bad Email #178 "bike thief"
Advertisement:

Alice hides from Bob behind an inanimate object. When Bob moves away or isn't looking, she picks up the object and follows him. The object is most often a bush (hence the name), but it may be anything that fades into the background (such as a cardboard box or traffic cone).

Frequently the object will end up somewhere it has no right to be (e.g., a shrub may end up in the middle of a street). Sometimes the object will fall apart almost completely, leaving them with only a few twigs left, which they then either look at and toss away, or maybe continue to hide behind. Alternately, the disguise might work a little too well and get mistaken for the real thing, with humorous consequences (e.g., a fake tree getting "marked" by a passing dog).

Often this overlaps with Paper-Thin Disguise, but not always; this can actually be Truth in Television to a degree. It's called "Change Blindness."

So long as Bob doesn't actually see the bush move, there's a good chance he won't notice that it's in a new location. There are some very fascinating videos

on YouTube demonstrating this. Thusly, if Alice is competent, she may not actually be obvious to Bob, only to the audience.

Occasionally utilized by Naked People Trapped Outside. If the object used to hide is literature of some kind this can be a Newspaper-Thin Disguise. If the shrubbery is stationary, that's Tree Cover. If you're doing this on stage, it's Playing a Tree.

High-tech tanks equipped with camo-projectors and spectrum cannons that can boil metal.

High-tech tanks equipped with camo-projectors and spectrum cannons that can boil metal.