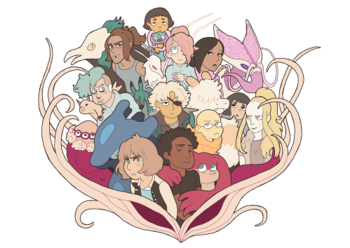 is a Webcomic by Magnolia Porter of Bobwhite fame. It is now complete. A mirror can be found here

When walking home one day Bina Blum sees something out of the corner of her eye move behind a building. When she goes to investigate a strange creature jumps into her body and causes her heart to become its own sentient entity outside of her body. A mysterious organization seeks to control the process and use the phenomena for its own gain.

Bina interacts with various other children affected by this strange ability which causes one of their body parts to take on a mind and personality of its own, whilst still functioning somewhat as if the organ were in/attached to the body from which it came, which in Bina's case keeps her alive.

The CoLab HQ has begun a let's read.