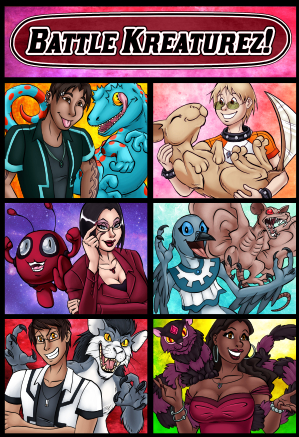 is a workplace dramedy about competitive monster-tamers. It aims to tell a story where the characters and chemistry carry the plot, while treating the science fiction elements as mundane facets of everyday life.

In the world of Dimentiara, monsters are a fact of life, be it the wild, super-powered beasts lurking in the unclaimed lands, or the genetically engineered pets and beasts of burden that help move society along. These organisms are known collectively as 'kreatures'. Genetic technology has reached the point of commercialization, and customized organisms are as much a cornerstone of Dimentiaran society as any other technology. It even forms the basis of Dimentiara's largest sports industry: Kreature Combat!

In kreature combat, licensed tamers bond telepathically with their pets and fight as one entity for fortune, fame and fun. Though the fights appear quite brutal, battle kreatures are designed with an array of biological failsafes that ensure that they aren't seriously injured, and moreover that they can enjoy and consent to combat.

That's the life Ben Weiss wants for himself and his beloved Jagaldie, Slash. The problem is, he's not very good, and moreover he lacks any contacts in the professional world to give him pointers. And so one day he resorts to the fallback of any young, upstart hero and decides to find a remote place in the wilderness to train in solitude - This goes exactly as any trek into monster-infested woods tends to. Fortunately, the commotion from his altercation is loud enough to draw the attention of the Wyldcard Compound and its team of tamers who rush to his aid and pull him(quite literally) from the jaws of death.

Now Ben sits at the feet of an actual professional kreature combat team. This may be his final chance at success, but can he earn his place among the Wyldcard team, who are hurting financially as it is? And moreover, can the Wyldcard team afford to have him?