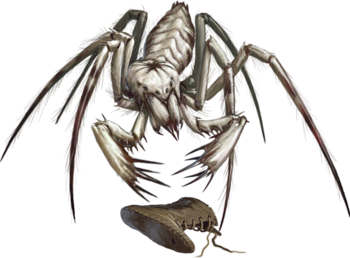 The dreaded camel spider is such a horrible creature that it's often cited by atheists as proof that there can be no such thing as a kind and loving God as long as it roams the Earth. Camel spiders are not technically spiders. Rather, they're an unholy hybrid of the most awful aspects of both spiders and scorpions. [...] They are without fear, they never sleep, and they viciously attack anything that they perceive as a threat, which is anything they perceive.
—Drizz'l, 8-Bit Theater
Advertisement:

Solifugids (lit. "sun-fleers", after their habit of hiding from bright lights), also known as solifuges or, more colloquially, as camel spiders, sun spiders and wind scorpions, are an order of arachnids related to true spiders and scorpions and chiefly found in deserts and other arid areas. They possess a fearsome reputation in urban legends and popular fiction, where they typically appear as intensely aggressive desert terrors that will attack humans at the slightest provocation. They are often portrayed as highly venomous; traditionally, their bites are described as being either paralytic or outright deadly.

The urban legend originates from encounters with these creatures by soldiers stationed in North Africa and the Middle East in modern conflicts. The soldiers described these creatures as gigantic, capable of running at extreme speeds and aggressive enough to attack humans and camels. Pictures posted by American soldiers duly made their rounds on the internet where, between dramatic posing, the strange appearance of the creatures, their unfamiliarity to most audiences and the grapevine effect, they were swiftly made out to be terrifying monsters.

In real life, however, very little of this holds out. Real solifugids aren't terribly aggressive — they don't usually go after prey larger than big arthropods or smaller mice and lizards, let alone much bigger humans. They're also one of the few orders of arachnids to be entirely non-venomous — meaning not that they happen to possess venom that simply isn't strong enough to be more than an irritant to anything larger than a rat, as is the case with most spiders, but that they lack any venom glands or ducts whatsoever. Solifugids rely exclusively on strength and their enlarged, powerful jaws to bring down prey.

It's not impossible to see where this reputation has come from, however. Solifugids are exotic creatures, for one — they're not found in Europe or in most of North America, and for tourists, soldiers and explorers from those areas wild solifugids are thus something of an unknown quantity. Solifugids are also very fast runners and ferocious hunters of their natural prey, and their reliance on biting to subdue their food means that their jaws are proportionally immense compared to a spider's or a scorpion's. Also, their drive to get out of the sun is so powerful that they really do run towards people to rest in their shadows, adding to the startle factor in people who don't know what they are.

Sub-Trope of Artistic License – Arachnids. Compare Spiders Are Scary and Scary Scorpions, for other arachnids portrayed as much more dangerous than they are in real life, as well as Creepy Centipedes. See also Seldom-Seen Species, as solifugids feature in fiction much less often than spiders and scorpions do.