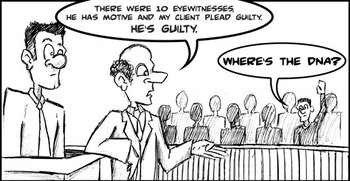 I saw them do it on CSI. It has to work that way!
Advertisement:

A particular form of Reality Is Unrealistic. First coined and covered by the media in the mid-2000s, the Trope Namer is CSI, a widely popular and long-running franchise of police procedurals focusing on criminal forensics. It's also attributed other crime dramas that aired in the wake of CSI's success, such as Criminal Minds, NCIS, and Bones.

It was originally used in a negative light, blaming the show's Hollywood Science for giving real-world juries false expectations about the importance and accuracy of forensic evidence. This page, however, uses the term a bit more broadly, for all major cases, positive or negative, of how the popularity of crime shows impacts how the public approaches crimes, how criminals commit them, and how the legal system prosecutes them.

People's perception of crime and criminal investigations being colored by crime and legal dramas definitely predates ''CSI'' by decades, nor is it unique to forensics. Perry Mason led to some juries in the 1960s not convicting unless they saw the accused confess in court. Quincy, M.E. and Law & Order have been accused of distorting people's ideas of criminal investigation, and Judge Judy was singled out by academic papers

for causing many Americans to misunderstand the purpose and role of the judge in courtroom trials. The series 24 has its own namesake "effect," where its depiction of torture allegedly caused the American public to overestimate its effectiveness. The other wiki also has a featured article on this topic

The only way to prove anything in a criminal case beyond reasonable doubt is to use the most state-of-the-art, comprehensive analysis.

No, this isn't true, but in some stories it is a Self-Fulfilling Prophecy.

Collecting Smoking Gun forensic super-evidence takes much less time In-Universe in CSI-like stories than it does in Real Life because of time compression — both to make the show fit in an hour with ads, and to make the In-Universe timeline of a case not last for years. In the show, DNA tests work in hours; in Real Life, it can take months (a DNA analysis can take a few days to complete and American crime labs are infamously overworked and backlogged). Unfortunately, jurors are frequently unaware of the time difference; getting evidence beyond a reasonable doubt by the CSI measure can conflict with giving the defendant a fair and speedy trial. And heaven help the prosecutor if the jury wants evidence of a kind that doesn't exist yet! At least one of the CSIs has had security camera footage rotated to see the back of something, for instance.

Most of the trouble comes from forgetting the "reasonable" part. You don't need ironclad proof of someone's guilt to convict them; you just need enough that there is no credible scenario in which they're innocent. For example, it's possible that Defendant X didn't mean it when he said he wanted the victim dead, picked up the murder weapon just to look at it, left his DNA at the crime scene before the murder, and Googled "body disposal" out of morbid curiosity. But all that's a little much to ask a jury to swallow.

On the plus side, some say jurors who expect forensic evidence are less likely to place excessive trust in the accuracy of witness testimony, and that this may reduce the risk of wrongful convictions. Witness testimony has been thoroughly demonstrated to be one of the least reliable forms of evidence and one of the most frequent causes of wrongful convictions. See the Real Life sections of Fake Memories, Laser-Guided Amnesia, and Weirdness Censor for just a few reasons why some groups advocate for the elimination of testimony as evidence altogether in favor of purely forensic-based trials.

See these stories from U.S News and World Report,

Criminals who are aware of crime scene analysis may take steps to attempt to throw off the analysis.

These steps are usually relatively simple, such as picking up spent shell casings, or wearing gloves. Some criminals have deliberately planted DNA samples from other plausible suspects to derail any investigation. In one particularly extreme case,

Jermaine McKinney of Ohio committed a double murder, then cleaned the crime scene (and himself) with bleach to destroy DNA traces, bundled the bodies before transporting them and lined his car trunk with plastic to prevent fiber and blood contamination, collected his cigarette butts and took numerous other steps; he was only caught because he was unable to dispose of his murder weapon (a crowbar) in an unexpectedly frozen lake and simply left it sitting on the ice.

Note that some law enforcement officials believe this can be a good thing, as many criminals end up generating more evidence by trying to dispose of it. Max Houck, director of the Forensic Science Initiative at West Virginia University, gave the example of a man who would not lick his envelopes to avoid leaving DNA, only to leave hair and fingerprints in the adhesive tape he'd use to seal the envelopes.

Civilians who are aware of crime scene analysis leave crime scenes alone or take steps to preserve the evidence.

This helps make up for the second effect.

One British kid, remembering something he'd seen in CSI: Miami, managed to preserve some evidence in a case — and got in the papers for it.

This phenomenon predates CSI by quite a bit. For example, during the Manson murder case, a kid found a gun in a field. Having watched Dragnet, he knew to pick it up by the muzzle to preserve fingerprints. Unfortunately the cops didn't, and grabbed the gun by the handle, obliterating any fingerprints.

Some CSI labs have complained that more police officers call them to crime scenes and submit much more evidence to them. Yes, that's right; real-life CSI techs are complaining about being expected to help solve more crimes. This is because real life CSI labs these days tend to have a month or two of backlog before they take on new cases. Making them take relatively minor cases hurts more than it helps.

Forensic reports from the prosecution are always considered true.

This one, when it happens, severely annoys defense attorneys.note This is a subset of a well-known problem, the tendency of jurors to place more weight on the testimony of police officers and other representatives of the authorities. This happens even though the science behind forensics is constantly evolving, and many labs are using methods no longer considered certain.

One notorious case down in Texas involved a man who was convicted on the basis of his lip prints — a method of identification that has been widely considered unreliable for decades. Even worse, a man in Oklahoma spent almost two decades on death row for a crime that it was later proved he didn't commit. The primary evidence against him, aside from blatantly specious interrogation tactics? The shape of his hair follicles, a mode of identification that was proven useless in 1885, over a century before the murder took place.

Another notorious case in Texas has been the actual execution of a man accused of setting a house fire which killed his children. This one is very touchy for people on both sides of the issue of the death penalty for obvious reasons, but one fact which is beyond dispute (amongst experts not directly involved in the prosecution) is that the ostensibly ironclad signs of arson found by the investigator were proven by later research to not be definitive at all.

The arson-evidence controversy later was explored in the Law & Order: SVU episode "Torch," portraying two fire scene investigators arriving at opposing conclusions about whether a man had set fire to his house, killing his family. The first investigator, near retirement, relied on outdated methods of interpretating the evidence; the second investigator (with the help of a District Attorney played by Sharon Stone) recreated the scene and demonstrated that the other investigator's interpretation was flawed. The episode is discussed in this news article