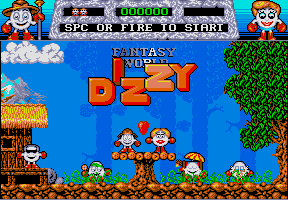 Dizzy is a series of Action-Adventure games created by Andrew Nicholas Oliver and Philip Edward Oliver, also known as the Oliver Twins, and released by Codemasters in the UK during the mid 1980s to early 1990s. Most of the games were developed for the home computers systems of the time, though some (unlicensed) console ports were made.

The games concern the various adventures of Dizzy, a member of a race of egg-people called the Yolkfolk who live in a High Fantasy world of dragons, trolls and treetop villages. Most of his adventures involved saving his fellow Yolkfolk from peril or escaping a dangerous land.

To solve his various problems Dizzy picks up a variety of strange items and when he's found the proper place to use them, drops them again. As he can only carry a few items at a time, though, the player is frequently forced to walk from one side of the map to the other to get something useful.

Fantasy World Dizzy, the third game in the series, is famously adored by Ben "Yahtzee" Croshaw - if ironically and through a heavy dose of Nostalgia Filter. (He does a Let's Play of the game on his blog: Part 1,

) Stuart Ashen is a fan of Treasure Island Dizzy, the second game in the series, as he points out here.

Games in this series
The main games of the series are all adventure games:

There were also spin-off games, featuring Dizzy but belonging to other genres: