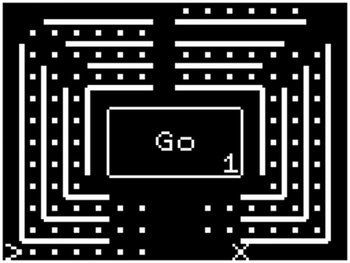 The gameplay is identical to the Sega arcade game Head On released in 1979. You're a car racing through eleven mazes, trying to grab all the dots in each one while dodging Xs. Your car can't brake, but it can change directions when it finds an opening, and your only advantage over the opponent is a turbo button. Even scraping against your enemy will cause the screen to reset. In later levels, more opponents are added, and they begin to speed up.

Dottori-Kun wasn't intended to be a particularly original game, nor was it intended to be played in arcades. It is a tiny, budget PCB that was made to comply with new a regulation in Japan that said that arcade cabinets could not be sold bare. Several companies, including Sega, created tiny, low-budget "games" that would be sold with their arcade cabinets. Dottori-Kun was intended to be removed from the cabinet by the arcade owner and replaced with another, better game. It was also used to test the hardware of the cabinet.

Tropes found in this "game":