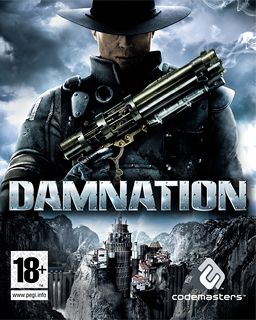 Damnation is a Steampunk-flavored Third-Person Shooter with strong platforming elements developed by Blue Omega Entertainment and published by Codemasters in 2009 for PC, Xbox 360 and PlayStation 3.

It's an alternate early 20th century where The American Civil War has dragged on for decades, and steam engines rule the day. A powerful businessman, Lord Prescott, whose company, Prescott Standard Industries, supplies deadly weapons to both sides, has decided that he would like to Take Over the World. To that end, his armies begin a campaign of conquest across the western US.

The player takes the role of rugged frontiersman Hamilton Rourke, whose small band of resistance fighters, the Peacemakers, are attempting to stop Prescott from steamrolling the country.

While primarily a Third-Person Shooter, the game featured frequent jumping and climbing segments similar to Uncharted, including gun-fighting while suspended possibly several hundred feet in the air. The levels were massive, to the point where most of the game was spent simply getting from one place to another, while fighting, climbing and riding high speed steam-bikes.

Despite looking and seeming very cool, the actual game fell flat, and garnered mostly negative reviews. Damnation's failure forced its development studio, Blue Omega, to shut down a month after the game's release.

Unrelated to the 2017 USA Network series of the same name.

Tropes that appear in Damnation