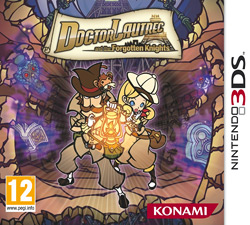 They Tame Ghosts!
Doctor Lautrec and the Forgotten Knights is an Action-Adventure game by Konami for the Nintendo 3DS, released in 2011.
Advertisement:

Doctor Lautrec is a French professor at a museum who studies ancient treasures, solves mysteries, and tames ghosts that he cannot even sense. and all the while he's got a suit, top hat with a monkey in it, a peppy female assistant (who can see these ghosts) named Sophie, and a few more colorful characters to go with it.