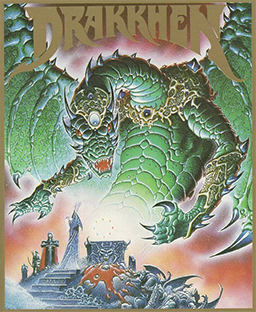 Drakkhen is a three-dimensional RPG which was created by French developers for the Amiga and Atari ST, and subsequently ported to several other platforms, including MS-DOS and the Super Nintendo Entertainment System. Originally released by Infogrames in Europe in 1989, it was released in North America in 1990. Gary Gygax helped to write the plot and designed parts of the gameplay and many of the monsters.

In the beginning the world was bound to the dragons, the source of all magic. A prophecy proclaimed that if they ever died out, humanity would be destroyed as the Drakkhen (scaly half-dragon Humanoid Abominations) emerged to rule. One day, a particularly stupid paladin found and challenged the last of the dragons. After a difficult battle, he managed to slay it, and with its dying breath the beast screamed the curse the triggered The End of the World as We Know It.

You control a party of four adventurers sent to an island (the only place where magic still exists) to negotiate with the warring Drakkhen rulers, all in an attempt to gain a pardon for the actions of the stupid paladin. Some of the Drakkhen are benevolent and actually help you, but most of them are evil, so of course that means you have to kill them.

And that's the plot...for all the versions except the SNES version. Which had a drastically different plot period: the "Drakkhen" in the SNES version were the regular humans who had eight special gems stolen by four elemental dragon kings, that then divided them between their children, each dragon having a son and daughter. The party is sent to the homeland of the eight dragon princes and princesses to retrieve the gems and wrest control of the universe from the dragons. About the only thing that's the same between all versions is that some of the royalty are benevolent and most are evil.

A semi-sequel, Dragon View, was released for the SNES. It retained the 3D travel map, but changed the core gameplay to a single-character, side-scrolling hack n' slash in the style of Zelda II: The Adventure of Link, along with scripted cutscenes and a much more coherent plot.