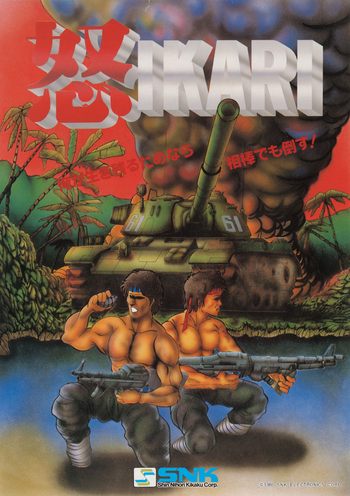 That's Clark on the left and Ralf on the right, so don't get them mixed up.
Advertisement:

This classic Shoot 'em Up by SNK featured two Rambo-esque commandos, Ralf Jones and Clark Stillnote who for some reason, were renamed "Paul" and "Vince" in the U.S. versions until their presence in The King of Fighters series, who fight their way through hordes of troops, tanks, mines and helicopters to reach the village of Ikari. The arcade game featured a rotary joystick, which could be turned to have the hero fire in eight directions, while moving in any direction the player likes.

The game was actually a follow-up to an earlier game called TNK III, in which Ralf battled enemies inside a tank. A sequel to that game was released for the NES called Iron Tank.

Two direct sequels, Victory Road, where our heroes are Trapped in Another World, and Ikari III: The Rescue, where they were sent on a mission to rescue the president's daughter, were developed, but neither caught on as the original game did.

Though the series itself died, its heroes live on: Ralf and Clark themselves eventually got a redesign and were included in the then-Massive Multiplayer Crossover The King of Fighters '94. They've stayed on that series as recurring characters, then in 2006, they returned to their Run-and-Gun roots when they appeared in Metal Slug 6. They have since been mainstays in both series'.

For tropes related to Ralf and Clark themselves, see the King of Fighters character sheet.