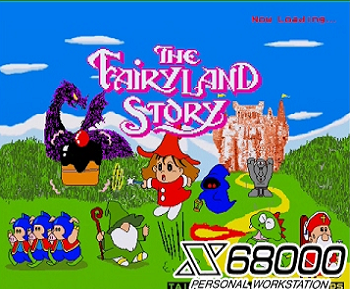 A 1985 Arcade Game by Taito, set in the Super-Deformed fantasy world of the Alfalfa kingdom. The gameplay is similar to Taito's later and more famous Elimination Platformer Bubble Bobble, though without a co-op mode. The player controls the little red witch Ptolemy, whose magic wand can transform monsters into cake. Ptolemy has to defeat all the enemies of 100 single-screen stages before challenging the dragon Dracolisk for a magic crystal.
Advertisement:

Ports for the MSX and Sharp X68000 were Japan-exclusive, but the game did receive an international rerelease on the Taito Legends 2 compilation.