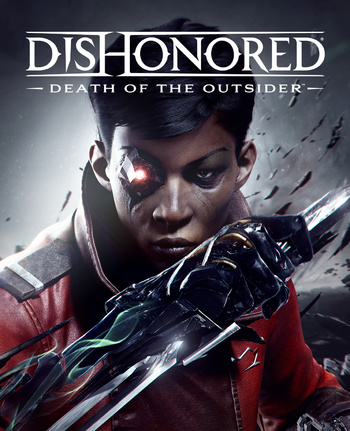 Do the Impossible...Kill a God
Daud: You up for one last job, Billie?
Billie: Who's the mark?
Daud: The black-eyed bastard who's responsible for all the chaos.
Billie: We're gonna kill the Outsider.
Advertisement:

Set several months after the events of Dishonored 2, Billie Lurk resurfaces in Karnaca, burdened by strange dreams. She tracks down her old mentor and boss, Daud in Karnaca. Daud reveals that he has spent decades plotting the Death of the Outsider and wants Billie to aid him in his quest. Yet, the Outsider pays Billie Lurk a visit too, allowing her to converse with him, and leaving her trapped in a curious condition: without being marked by the Outsider, she gains access to Void-based powers and a slew of mysterious artifacts, albeit at the cost of her hand and one of her eyes which has been replaced by strange appendages.

Gameplay takes a turn away from standard Dishonored fare in a number of notable areas. The Chaos System from the previous titles is completely absent, meaning Billie is not punished for killing people as much as Corvo or Emily were. Billie's powers are three completely new ones- the first is Displace, which allows her to mark a place for teleportation and then move there as long as she has direct line of sight with her destination. The second is Foresight, which allows Billie to stop time and scout out the area ahead. The final power she gets is Semblance, which allows Billie to take the shape of any person who is still alive and speak with their voice. The game also includes a contract system for Side Quests, adding optional objectives in exchange for tangible rewards upon completion.

Death of the Outsider was released on September 15, 2017 on PC, Playstation 4 and Xbox One. The trailer can be seen here: (major Dishonored 2 spoilers)

SPOILER WARNING: As it's a direct sequel to the game and entire pages cannot be whited out, spoilers for Dishonored 2 will be unmarked on this page.

Dishonored: Death of the Outsider contains examples of:

Billie spares the Outsider, allowing him to enjoy his newly returned humanity

Billie spares the Outsider, allowing him to enjoy his newly returned humanity