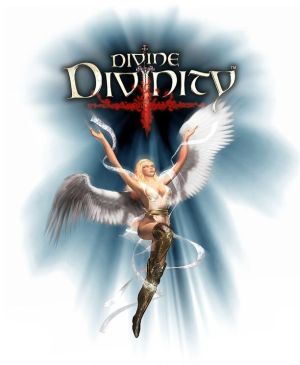 Divine Divinity is a 2002 role-playing game for the PC, developed by Belgian developer Larian Studios.
Advertisement:

Set in the Standard Fantasy Setting of Rivellon, Divine Divinity follows a very similar gameplay style and graphical style to the popular Diablo, but mixes in Baldur's Gate-style dialog tree conversations with humorous, sometimes lampshade-hanging dialog. The game has a linear main plot, but exposes you to a well-sized Wide-Open Sandbox full of little side-quests and secrets to find in the wilderness.

Divine Divinity was well-received at the time, but ultimately forgotten about, though two sequels were released. Thanks to digital re-releases on GOG.com and Steam, the game and its sequels have slowly gained more appreciation.

, the games occur in following order:

That said, Larian's writers have never been sticklers for continuity, so most games a) can be played standalone without knowing the plots of the previous games and b) liberally apply Retcon to the events of previous installments for dramatic effect.