The Marked One / The Divine / Lucian 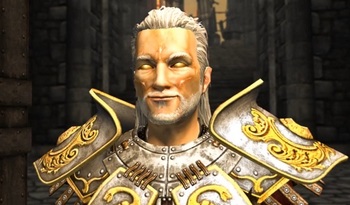 Lucian the Divine, in Divinity II
The main protagonist of Divine Divinity, marked as a candidate for the next Divine One. Their class, name, and gender in the first game is chosen by the player, but in later games is canonically a male paladin named Lucian. 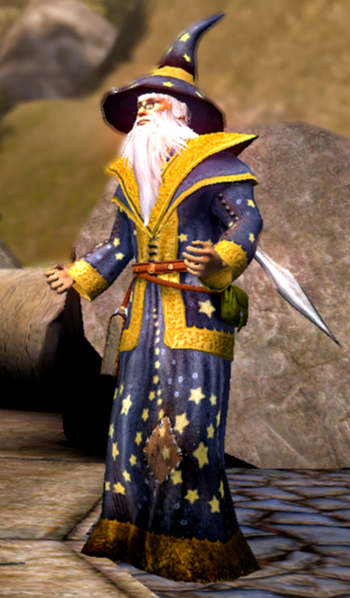 Zandalor's appearance in Divinity II: Ego Draconis
The wizard of the Council of Seven in Divine Divinity. Appears throughout the Divinity series, usually as an adviser. 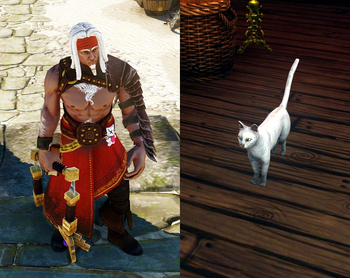 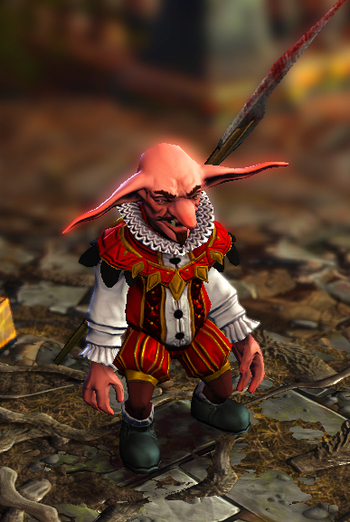 ZixZax's appearance in Divinity: Original Sin
A time-travelling imp chronicling all of history.

The knight that wields the sword Brightblade. Sent to request the aid of Aleroth's healers to help cure a plague, he ends up stranded there due to orc attacks until reinforcements can come. Appears again in Divinity II, disillusioned after great losses.

A necromancer whose body is within catacombs under Aleroth, waiting to be revived by his minions. His mortal self appears in Original Sin, which takes place in Rivellon's distant past.

The Seven Gods of the Divinity universe. Responsible for elevating The Marked One into The Divine One, and play a prominent role in Original Sin 2 by choosing and advising the Godwoken.

The god of Humans, and the most powerful god.

The god of Dwarves, who lived among them.

The god of Elves, and a poet.

The goddess of Lizards, wanting to command a proud warrior race.

The god of Orcs, who was renowned for his brutality, and enslaved his own creations for centuries before leaving Rivellon.

The goddess of mirth and laughter, who created the Imps.

A solitary goddess, whose dalliance with a wizard led to the creation of demi-gods, motivating her to become the patron of wizards. Also a somewhat informal deity to the undead in Original Sin 2.
The Council of Seven

The chief healer of Aleroth, possessed by Thelyron until the Marked One helps him. He is later chosen to be in the Council of Seven.

A lizardman healer, later chosen to be in the Council of Seven.

The elven ambassador from Teneb Tiriel, later chosen to be in the Council of Seven.

A dwarven ambassador chosen to be in the Council of Seven.

The orc chosen to be the representative of his race in the Council of Seven.

An imp that works for the Black Ring, but is later chosen for the Council of Seven.
Advertisement:
The Black Ring

The young ruler of the human kingdom, who claims to be the next Divine One. Was completely taken over by the fragment of the Lord of Chaos' soul in the Sword of Lies.

Duke Janus' adviser, who is actually a hag working for the Black Ring.

A sorceress of the Black Ring.

A sorcerer of the Black Ring.

A sorceress of the Black Ring.

A sorcerer of the Black Ring.
Minor Antagonists

A zombie that really disliked his wife Esmerelda. Originally buried in Aleroth, though he can later attempt to kidnap a lady named Elora outside of the village. Similarly-named characters appear in Divinity II and Divinity: Original Sin.

An assassin sent after Richard.

The assassin that killed the previous Duke.

A man researching how to cure the Grey Death plague, though the truth is that he's the one behind it, tainting the well in the poor district with toxins gained from the Black Ring (and meant for the Ducal Army).

A vampire and drudanae dealer, planning to eventually buy a boat ride out of Verdistis.

A trio of trained killers that supply Tingalf with ill-gotten gains.

A Dragon Rider of house Hamunabi, and his mount. His sect of lizardmen ousted Imps from their castle, and they now protect the Dragonheart gem within.

A Thunder Lizard, and Rak'Sheen's subordinate.

A former submarine builder, now cursed into the form of a giant crustacean by an artifact from the sunken city of Atlantos.
Historical Characters

An evil god, sealed away by the League of Seven. The goal of the modern-day Black Ring is to bring him back.

The arch magus leader of the Legion of the Damned, gifted the Sword of Lies by the Lord of Chaos.

The League of Seven

The founders of the modern-day Council of Seven.

A warmage, the founder of the League/Council of Seven, and the main protagonist of "The Prophecy" (a backstory PDF that came with the game).

Ruben's distant cousin, the leader of the human realm in Rivellon, and the first human representative of the League of Seven.

The first Elven representative of the League of Seven

The first Dwarven representative of the League of Seven

The first Lizard representative of the League of Seven

The first Imp representative of the League of Seven

The first Orc representative of the League of Seven.

Ruben Ferol's apprentice, who struck the final blow to Ulthring, and later sealed the Sword of Lies (and himself) under Stormfist Castle to protect others from its corrupting influence.

A distant cousin of Dylan Ferol's, the new ruler after Dylan's death, and an old friend of Ralph's.

Chief Archivist of the Black Circle, and last living member of the Legion of the Damned.

The dwarf that first explored the area where Stormfist Castle now lies.

The first Elven King who came to Rivellon.
Aleroth

The healer from Aleroth that rescues The Marked One at the game's onset.

A dwarf healer in Aleroth.

A dwarf merchant in Aleroth. Is addicted to drudanae, and ends up being murdered by his vampiric dealer when he can't pay for it and threatens to blackmail him.

A bodyguard cursed to serve the statue of a client he failed to protect, even after his natural death.
Farmlands

A knight of Stormfist Castle, on the run from an assassin after investigating the previous Duke's death.

A married farmer couple. Hugh used to be a tailor for Verdistis nobility, but left for the country after a client became too clingy.

The leader of the human army.

A member of the human army fighting against the Orcs.
Rivertown

Head of the Town Watch, with suspicions about the previous Duke's death.

The mayor of Glenborus, a dwarven village. Brother of Kelp, king of the Dwarven Halls. A heavy drinker, even compared to other dwarves. Was tricked by the Black Ring into giving them the Axe of Stone, helping instigate a war with the elves.

A stonemason, specializing in headstones for graves.

A wood elf of the Larkwing family, imprisoned after being framed for the theft of Glenborus' treasured Axe of Stone.
Verdistis

A merchant with ties to the Assassin's Guild.

A banker, and Dante's rival.

The man in charge of the City Watch.

The secretary of the Merchant's Guild, and an embezzler.

The archivist for the Merchants' Guild, who's also the guild master of the Assassin's Guild.

Tavern owner, and head of the Thieves' Guild

A thief in the Thieves' Guild that owns a set of magic lockpicks.

A master lockpicker, and member of the Thieves' Guild.

A merchant that sells goods stolen from travelers

Owner of a tavern and brothel.

A summoner, and associate of Penumbra.

A femme fatale that gets on the wrong side of the Thieves Guild. Is mentioned in Divinity II, as the grandmother of the assassin Antumbra, and the first to have begun hunting Buad the alchemist.

A man that owes a monetary debt to Sir Patrick.
Dwarven Halls

The king of the Halls.

A dwarf that went mad after witnessing horrors in Dol Pyrden, one of the various tunnels below the Dwarven Halls.

The guild master of the Warrior's Guild.

An elf from the village of Fiu Nimble, always the opposite gender of The Marked One. The focus of a parodic Romance Sidequest.

The father of Elean/essa.
Stormfist

Janus' girlfriend and a former chambermaid of Lady Anastasia.

Janus' mother, and wife of the previous duke. Banished from Stormfist Castle's interior, but still lives within its outer walls.

The head of the old Duke's bodyguard, forcibly retired by Duke Janus.
Wastelands

Lord of the Dragons.
Other

Another Marked One, waiting for Zandalor at the Dwarven Bread Inn.

A third Marked One, who was captured by Stormfist's guards while he and Zandalor were checking to see if the Sword of Lies had been released.

The elven head of the Archer's Guild

Sir Dante's estranged son, living in the poor district and sick from the Gray Death.