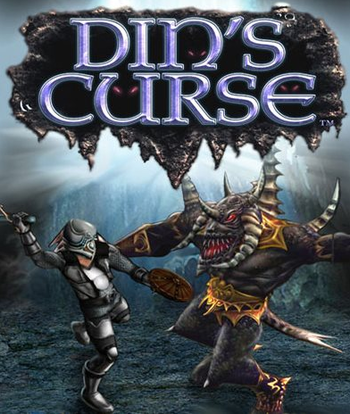 Din's Curse in a 2010 Action RPG / Roguelike hybrid, developed for PC and Mac by an indie studio Soldak Entertainment.
Advertisement:

You play as a man or woman who, in your past life, lived a life of sin and debauchery. In retaliation, Din, Champion of the Gods, has placed a curse upon you. Until you have redeemed your soul in his eyes, you are doomed to be his servant for all time. In order to redeem yourself, you must travel to the infinite towns of Alleria, save the people from the rampaging monsters, and in general do heroic acts until Din deems you worthy.

Din's Curse is unlike most Hack and Slash RPGs in that it takes place in a fully dynamic world. Each town is different from the last, and each has a equally different dungeon. Also, the monsters fight back. If you take too long completing a quest, the monsters will begin to grow bold and take steps to destroy the town, including gathering up their forces, sending spies and assassins to infiltrate and sabotage the town, converting villagers to their cause and, ultimately attack and lay waste to the town.

Another interesting aspect of the game is its class customization. There are 6 (7 in the expansion) full classes to choose from, each with three distinct specializations. Each specialization grants the player unique powers and abilities, and a single full class benefits from skills of all three of its specializations. Players are also capable of creating Hybrid Characters, which use a combination of any two specializations, for over 100 different combinations.

An expansion pack, Demon War, was released in 2011. After one of their main cities is sacked by undead, the Demons of the underworld have begun an invasion of Alleria, adding yet another threat for you to fight. Along with the demons as new monsters, Demon War introduces new dungeon and town layouts, new types of villagers, and a new class, the Demon Hunter.

After over a year of back and forth between Soldak and Valve, Din's Curse was finally released on Steam in August 2012, Demon War following suit in September the same year. A sequel, Din's Legacy, was released in 2019.