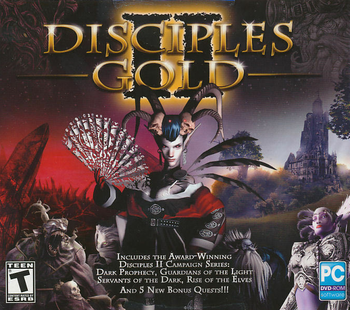 All units travel in parties which the player hires in cities. Each party consists of at least one unit, and at least one of these units is a leader unit, hired on their own at considerable more expense than other units, though they're usually more powerful anyways. All leader units have a leadership stat that determines how many other units can travel in their party.

The series began with Disciples: Sacred Lands in 1999. It featured the "First Great War", where the first four main factions of the game duke it out.

Disciples II: Dark Prophecy followed in 2002, and is the most beloved franchise instalment. It takes place a decade after the first, and, depending on the campaign you choose, it can follow the Empire's rebellion and the discovery of an heir to the Empire, the aftermath of the Legions' attempt to free their god, the Undead's attempt to resurrect Mortis' old lover, or just the Clans' attempts to rebuild and keep it together. It received three Expansion Packs: the Servants of the Dark and Guardians of the Light mainly added new campaigns and units, while the final one, Rise of the Elves, had made the elves playable and added a campaign for them.

Disciples III: Renaissance was developed by an altogether different company than the original and was released in 2010. It made multiple changes to the formula, with greater focus on RPG Elements, a hex-based grid battle system where some tiles can't be passed through and others convey bonuses, and the like. There was a campaign for the three races featured that made it into the game; the Empire, the Damned, and the Elves. The campaign centers around Inoel, an angel sent on an important mission by the Highfather. It also received an expansion pack bringing back the Undead called Resurrection.

Altogether, though, Disciples III was met with a terrible reception from both critics and the longtime fans. In response, it received and Updated Re-release in 2012 titled Reincarnation, which combines the plot of "Renaissance" and "Resurrection" into one package, reworks the gameplay in some parts and adds a few new elements, as well as putting the Mountain Clans back in the game. Ultimately, though, it still marked the end of the series...