"Who needs roads when there's DiRT!?" 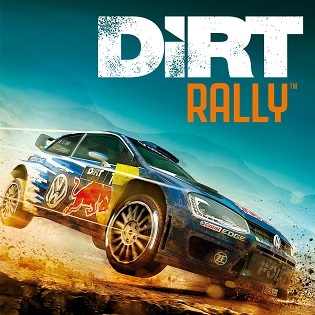 DiRT is a Soft Reboot Sequel Series of Codemasters' popular Colin McRae Rally series of games based around off-road racing, as the title implies, as well Rallying.

Colin McRae: DiRT was first released in 2007 for the Xbox 360, PlayStation 3 and PC. DiRT possesses a wide variety of vehicles to choose from; these range from the regular 2WD and 4WD rally car classes, to massive big rigs and rally raid trucks.

Colin McRae: DiRT 2 (or just DiRT 2) employed an 'extreme sports' style, with fluid, first person menus set in vibrant settings, as well as a heavy emphasis on pleasing the fans and becoming a star. In addition, the trophy trucks and buggies were the highlight of the game, with traditional rally races taking a backseat. With the success of Ken Block's Gymkhana videos supposedly generating buzz in rally interest, he and several other rally stars were roped in to add a human element, whilst acting as consultants on how the cars handle.

DiRT 3 set out to go back in the more simplistic style route of DiRT, all the while retaining features which made DiRT 2 stand out. Rally took center stage again, yet kept the Trailblazer and Landrush (trophy trucks and buggies) from DiRT 2 to keep the variety. Ken Block again helped with vehicle and handling consulting, as well as help add a much-requested Gymkhana mode.

DiRT Showdown was released on May of 2012. The game is more arcade-y than its predecessors, putting more focus on Gymkhana and putting in more modes, such as demolition derbies and party games. It was made into an actual Arcade Game by Sega in 2014, simply titled Showdown.

DiRT Rally went back to the series' roots, with a far more realistic handling model and a heavy focus on traditional rally. The game entered Steam's Early Access in April 2015. The full release came out on 7 December in the same year through Steam and it was released for both PC and eighth-gen consoles on April 5, 2016.

DiRT 4 was announced on January 26, 2017. Released in June, it's much closer to the Rally titles than its more lackdaisical predecessors. It features a random stage generator called Your Stage, as well as more officially licenced rallycross circuits and a new playground/driving school area called Dirtfish Rally School, based on the real-world rally school of the same name

. The game marks the comeback of Landrush, and there are two handling models, one more arcade-y and akin to DiRT 3, and the other more simulation-oriented and closer to DiRT Rally. Nicky Grist also returned to provide his co-driving voice, after his absence since the original DiRT.

DiRT Rally 2.0 was announced on September 26, 2018. The game features rally courses from Poland, Spain, Australia, New Zealand and United States as well as 8 official tracks from FIA World Rallycross Championship. The game was released on February 26, 2019, and featured former co-driver Phil Mills as he lent his voice for the game. Most of the stages from the first edition were eventually ported across with graphical improvements, with the exception of the Pikes Peak hillclimb as the licence was no longer available.

DIRT 5 was announced during the Xbox Live Presentation on May 7, 2020, and is set for release for current-gen consoles and Microsoft Windows October 16 of the same year, and a release for PlayStation 5 and Xbox Series X and Series S in 2021. The game goes back to the aesthetics of 2 and 3 and includes many of the disciplines from the previous titles - including buggies, super trucks, ice racing, rallycross and gymkhana. The game also introduces a full weather and seasons system where certain events are only available on determined seasons. Finally, a full-fledged livery editor a la Forza is also included for the first time ever in a Codemasters game and a narrative-focused career mode featuring the voice talents of Troy Baker and Nolan North.

Not to be confused with the short-lived FX Network series.