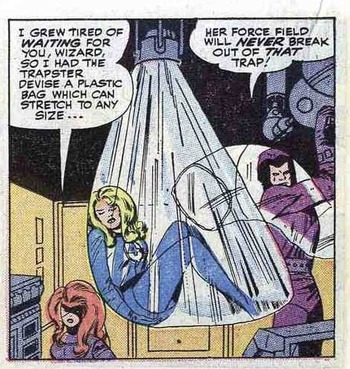 In the right hands, even a plastic bag can be a trap.
"I know what's out there. It's why I've planted a mine field, shotguns, and explosives all the way on the road to my little boudoir here."
— Dean Domino, Fallout: New Vegas
Advertisement:

Oh, you think you escaped the villain's grasp? You think you've successfully broken into a defenseless child's house to rob them? Oh boy, are you in for a surprise!

Open that door, I dare you. It's definitely not rigged to some horrific Death Trap. Jump through that window — it's sure to not have rusty spikes waiting for you at the bottom. Thought you could turn the key into that closet did you? Well good news — a gun is about to go off in your face!

You have accidentally come across the most annoying and sadistic pre-planner of all time, known simply as "the trap master". Are the traps illegal? Are they in any way realistically functional? Is there any possible way that the trap master could have set them up in a way that doesn't warp space and time? None of that really matters because no matter what you touch chances are it activates a Booby Trap that will lead to your hilarious death.

People that fall for the traps are usually Too Dumb to Live and/or a Determinator and don't know when to quit during their pursuit of whatever they are trying to achieve. It is not unusual for the Trap Master role to be given to The Engineer or The Smart Guy of a group. A character that is Crazy-Prepared will inevitably expose that they have at least dipped their toes into this trope's pool at some point or another.

In a Fighting Game or similar media a Trap Master character is Difficult, but Awesome, depending on mind games and often not capable of matching other characters blow-for-blow without softening them up first with the traps. Even with this kind of gaming balance, it's not unusual for players who follow an Attack! Attack! Attack! gaming style to call for a Nerf because when they do fall into the traps, they are in for a world of pain.

Has nothing to do with the similarly-named specialists in the Skylanders series.