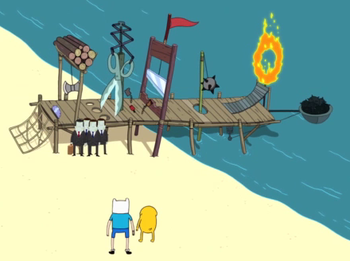 "Another day, another death course..."
— Ratchet, Ratchet & Clank: Up Your Arsenal
Advertisement:

The linear version of the Death Trap, the Death Course is a gauntlet through which a hero must pass, using all their acrobatic skills, guile, Le Parkour, and witty bravado. The hero may have to traverse a narrow walkway hundreds of feet in the air while avoiding swinging blades, guillotines, statues that fire lasers at them, mechanical hands that grab him and throw him off the path to fall to his death, boulders that roll along the path to bowl them over, molten metal pouring from the ceiling, Pit Traps, etc. If they fall victim to just one obstacle or hazard, then the ordeal — and their life — is over. Essentially a sequence of Booby Traps, with Everything Trying to Kill You.

These can be found in:

Any of the pitfalls included under Death Trap may be used in the Death Course, along with a few mobile classics of its own:

The Death Course makes a mundane walk in the park into a slightly less sadistic version of football training camp. It's common in video games where hazards are commonplace — in particular, Platform Hell games are built out of these — and action series. Sometimes, there are Dungeon Bypasses available.

The entire place was create so that only a Cooper could navigate it, so thieves who know the various techniques of the Cooper lineage are able to navigate its many traps.

The entire place was create so that only a Cooper could navigate it, so thieves who know the various techniques of the Cooper lineage are able to navigate its many traps.