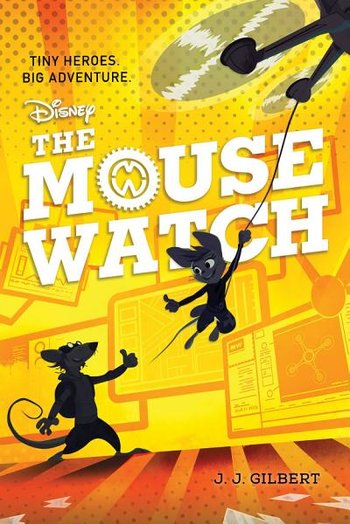 "It's basically like the MI-6 of mice!"
"Every part of a watch is important, from the smallest gear on up. For without each part working together, keeping time is impossible. We never sleep. We never fail. We are there for all who call upon us in their time of need. We are the MOUSE WATCH!"
—The heroes' Badass Creed
Advertisement:

The Mouse Watch is the first in a series of children's novels written and illustrated by J.J. Gilbert (the Pen Name of author and storyboard artist Jason Lethcoe) and published by Disney Hyperion Books. The concept is a Spin-Off of Chip 'n Dale: Rescue Rangers, with Breakout Character Gadget Hackwrench as part of the supporting cast.

The premise: Bernadette "Bernie" Skampersky is a daring 12-year-old rodent with a dream. Ever since she witnessed the murder of her beloved big brother Brody, she's been trying to join the Mouse Watch, an elite group of high-tech international crimefighters/do-gooders organized by Gadget. When the Watch finally recruits Bernie, she's paired up with another rookie, a nerdy teenage rat named Jarvis Slinktail — which she has a hard time accepting because a rat killed Brody, which has made her prejudiced against the entire species. However, Bernie and Jarvis are forced to work together when their training is interrupted by an emergency which leaves the fate of the world in their paws.

Not to be confused with Mouse Guard.