Songs in the Key of Lock 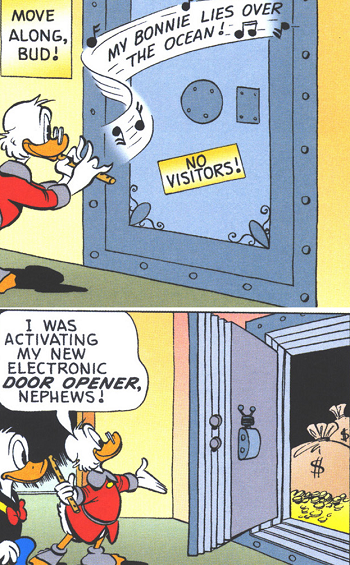 If you're tone-deaf, you're out of luck.
"Rhythm is the key
as you open up the door"
— Hive, Ultrasonic Sound
Advertisement:

Using music and musical instruments as security measures. Pianos or similar instruments are common, as you are dealing with keys. Can often be the way to conceal your secret lair by being Hidden in Plain Sight. The tune itself may be significant/ironic, or the Theme Tune or Leitmotif of a character.

Subtrope of Solve the Soup Cans. Compare with Musical Trigger. Can be related to Only Smart People May Pass, if actual musical ability is required.

Sister Trope to Open Sesame, when the password is a spoken phrase.