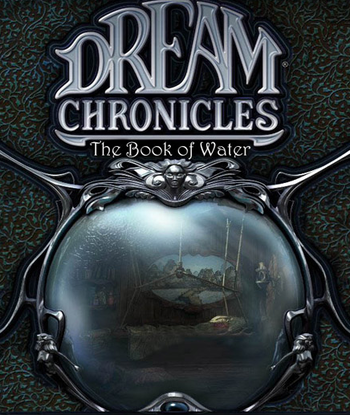 Dream Chronicles, also known as Dream Chronicles: The Endless Slumber, is a 2007 Hidden Object Game game developed by Kat Games. It opens up the first trilogy (Faye's Journey) in the game series of the same name.
Advertisement:

The game kicks off with Faye, a mortal woman whose face you never see, dreaming that the Fairy Queen of Dreams has cast a spell over her small hometown. Upon waking up, she finds everyone in the town of Wish asleep, including her daughter, and her husband Fidget is missing, although she can still hear his voice in her head. Turns out, Lilith (aforementioned Queen of Dreams) has kidnapped Fidget in order to marry him and increase her own powers. With help from her husband's journal, Faye sets out to rescue him from the clutches of the fairy queen.

Dream Chronicles has examples of: