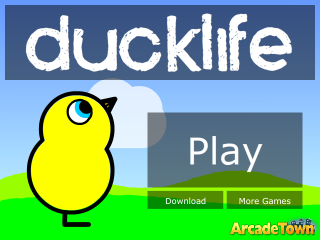 Train your duck to be a champion racer!
Advertisement:

The Duck Life games are a series of Adobe Flash and smartphone games by Wix Games. The games follow a farmer and the duck they raise from an egg training by preforming as well as possible in minigames. Once it's been trained enough, it has to race other ducks to beat them.