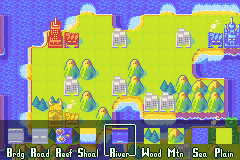 Have you ever played a video game that you really like, so much that you started to daydream about making your own levels for it and playing your own creations? Some game companies are nice enough to help players achieve that dream, by adding a level editor to their games.
Advertisement:

A level editor is a program, or feature built into a game, that allows players to make their own worlds, or in some cases, edit the ones built into the game itself. It has the potential to add a ton of replay value to an existing game, and can sometimes serve as a big selling point. Ironically, in some cases, the best levels tend to come from players rather than the less imaginative company that actually made the game.

Of course, this is all good as long as the editor is easy to use. When it's complicated and frustrating, the result is that a tiny minority of players actually bother to make their own levels, while others download and play them (if such a feature is available, and if enough players know how to use that feature).

Other games don't come with level editors, but editors may be unofficially created for them by fans.

Examples of games that come with their own editor:

Examples of games in which the community ended up creating an editor of their own: