Video Game / Praey for the Gods 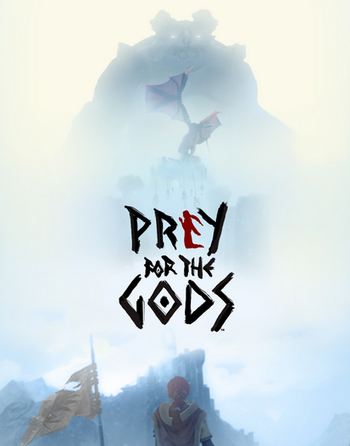 Praey for the Gods is an Action-Adventure game, developed and published by an experienced team of three named No Matter Studios. It is heavily inspired by Shadow of the Colossus, and blends its signature boss-slaying with survival elements in a more developed Nordic-style open-world. It was released on PC through Steam on January 31st, 2019. The full game is also slated for Playstation 4 and Xbox One.

The player character wakes up on a snow-covered island after their ship crashes on its shores. With scant few resources, they soon stumble upon one of the giants that inhabit the land. Managing to slay it, they are soon afterward dragged unconscious by a wolf to a temple, which directs them towards more of the giants of the land. With no way to escape the island, the player character has no choice but to continue her giant-slaying, trying to decipher the scant few hieroglyphs from the land's precursors along the way.

The game was originally officially titled Prey For The Gods, and it was funded

on Kickstarter under that name. However, Bethesda soon sued them, claiming that their name was a copyright infringement on the Prey trademark, and would interfere with the upcoming game. They settled by changing the name to its current form, but keeping the old logo on the cover.

Alternative Title(s): Prey For The Gods