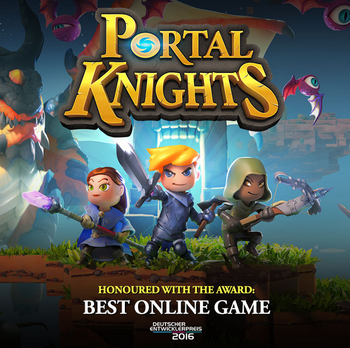 A Wide-Open Sandbox/Western RPG game in a similar vein to games like Minecraft. Taking place in a world that has been disrupted by an event called The Fracture, landmasses have taken to floating in the sky connected only by portals, each "island" in the sky representing a single biome or biosphere. Your mission as a Portal Knight: to reunite the world while crafting a variety of cosmetic and functional items gleaned from materials mined and gathered from these diverse environments.
Advertisement:

Gameplay is very similar to other sandbox/building style games such as Terraria and the above mentioned Minecraft, and will draw similiar tropes. The "voxel" look of the graphics is very familiar, as is the inventory and gathering mechanic used by the player. One of the key differences is the use of RPG elements, such as stat increases, skill lines and healing item mechanics.

Not to be confused with games like Portal or Spiral Knights.