You Wake Up on a Beach 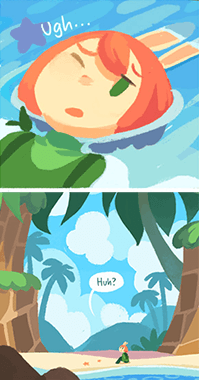 Every character has to start at the bottom, and then work their way to the top over the course of the story. Sometimes, though, an author will want to take that to its logical conclusion and start the story with the character waking up marooned on a beach with literally nothing except the clothes on their back and whatever was in their pockets. Or even less than that.
Advertisement:

This type of beginning gives the author an easy starting point for his story, because it boils everything down to absolute basics and comes standard with a predefined list of relatively simple questions for the author to answer; among them is usually "How did we end up here to begin with?", a good way to get the audience immediately vested into the story. Which questions he chooses to answer and what answers he gives add more detail to the scene and flesh it out into whatever story the author wishes to tell.

In video games, a beach is an ideal tutorial area for new players, since the critters are generally weak and easy to kill and the loot is basic enough for the player to learn how the game's inventory systems work before the game leads them inland to their first real adventures.

Note that this is when the main story of a work starts with a character waking up on a beach, regardless of where the plot goes afterward. This is not the same as a Robinsonade, though it can become one if the character's survival on the beach remains the focus of the plot. Also note that some works might include a brief prologue or flashback before the character actually wakes up. This is fine, so long as the work's main plot opens on this trope.

The boy wakes up and finds himself on a mysterious island, and then his adventure begins.

The boy wakes up and finds himself on a mysterious island, and then his adventure begins.