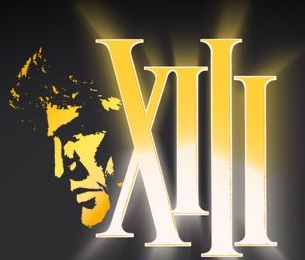 XIII (Thirteen in Roman numerals, Treize in French) is a successful long-running Franco-Belgian Comics series written and drawn by Belgians Jean Van Hamme and William Vance. The series was initially serialised in 1984 in Spirou and became instantly a hit. It was later published by Dargaud.

The series begins with a man found on a shore in Peacock Bay in the East Coast of the United States, suffering from amnesia due to a bullet wound to the head, and just the tattoo "XIII" on his collarbone to link him to his past. Volumes one through five deal with XIII searching for his identity and his past, only to find himself confronting the "Conspiracy of the XX" which aims for a coup d'état in order to overthrow democracy in the USA.

The rest of the series shows him dealing with the remnants of his past, stopping the number I of the Conspiracy once and for all, and facing more and more enemies afterwards, as a public reveal of his past would have very unpleasant consequences for some very powerful men.

Does this remind you of anything? Yes, it was heavily inspired by Robert Ludlum's Bourne Series.

A Spin-Off comic book series titled XIII Mystery explores the backstory of various characters of the initial series. Each album features a different art style by a different creative team, under the supervision of Jean Van Hamme.

The comic book series was adapted in 2003 as a First-Person Shooter by Ubisoft, and in 2008 as a two-part miniseries on NBC starring Stephen Dorff and Val Kilmer. A two season-long Franco-Canadian TV series was also produced, from 2011 to 2012.

For the full list of the installments of the original series and the spin-off, see the Recap page.