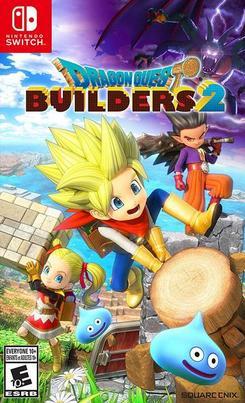 Dragon Quest Builders 2 is a Wide-Open Sandbox spinoff of the Dragon Quest series, and a sequel to Dragon Quest Builders. It was released for Playstation 4 and Nintendo Switch in Japan in December 2018, with a Western release following in July 2019. It was also the final game Kazuya Niinou headed as director for Square Enix before moving on to join Type-Moon's BB Studio.

The game is set in Torland, the world of Dragon Quest II. Unlike the original Builders, however, this game does not take place in an Alternate Continuity but instead continues the story after the end of DQII, exploring what happened with the followers of Hargon after his downfall. "Many moons" after the evil wizard's defeat, what few monstrous members of his Religion of Evil, the Children of Hargon, remain, take command of the one seafaring vessel still available to them and raid Cantlin in Alefgard for prisoners and slaves to help them survive, with a particular desire for capturing human Builders. This is to help further the cause of Destruction, the most central tenet of the Children of Hargon, and not at all to help them make a new base or ensure their ship doesn't sink. The ship, however, is caught in a massive squall, and begins to come apart, with one Builder being pulled beneath the waves...

...whereupon that Builder - you - wash ashore on a deserted, seemingly uncharted island alongside a mysterious amnesiac named "Malroth". Together with this rambunctious and destructive young man, you must set out on a journey to rebuild the island into the paradise it has the potential to be... and, in the process of traveling the seas to find help and residents for your new land, uncover the hidden truth of the place you now find yourself in and those you've met.

Building off of the foundation laid by the first game, Builders 2 incorporates several new features, including Co-Op Multiplayer for up to four players over the internet (and via local wireless on the Switch), the ability to fly and swim, Fast Travel, a dash button, and the ability to recruit a party of NPCs to accompany to player in their journey.