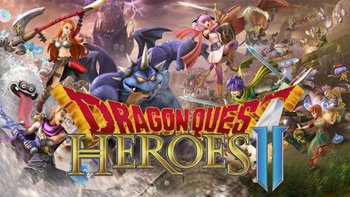 And that thing's just the first boss.
Should ever wicked war resume,
A dragon shall the sun consume,
And sibling souls be born as once before.
But till the land be steeped in blood,
May sovereign twins, however good,
Ne'er hope to rule in peace forever more.
— Prophecy delivered after the War of Kings
Advertisement:

One thousand years ago, the Demon Lord Fractos plunged the world into a horrific war that threatened to tear the world apart. However, under the leadership of the hero king Unos, Fractos was defeated, and man and monster came to live in peace as friends and allies in seven kingdoms. For generations, the world has known peace under the leadership of the kingdom of Accordia and its High King. However, when the king of the desert kingdom of Dunisia is found murdered and the king of the nation of Harba is implicated as a suspect, tensions between the seven kingdoms flare up and threaten to engulf the world in war once again. To prevent such darkness from engulfing the land, two unlikely heroes step forward to gather a group of like-minded and familiar warriors to find the true murderer and save the seven kingdoms from war.

Similar to the first game, Dragon Quest Heroes II brings pre-established characters across the Dragon Quest franchise into this Crossover:

Returning from the first Dragon Quest Heroes as part of the storyline are: