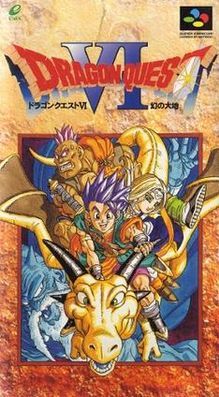 The sixth Dragon Quest game, and the third part of the loosely-connected Zenithian trilogy. The evil demon king Murdaw has terrorized your world for too long — while many other adventurers have challenged him and failed, never to return, you and your faithful companions are determined to succeed! Bravely, you storm his castle, charging straight for his throne room unimpeded...

...And then are swiftly defeated. To Murdaw, the three of you are nothing more than irritating flies; all you can do is watch helplessly as he dispatches your companions, then turns his attention towards you...

Then you wake up. Safe in your isolated mountaintop village, where the most exciting thing happening lately is the approaching festival honoring the mountain spirits...

But surely you don't expect things to stay peaceful, right? A simple errand quickly snowballs into your stumbling across a strange phenomenon, and before long you find yourself exploring both the Real World and the Phantom World, discovering the secrets binding them together... and gathering companions, some of whom seem strangely familiar...

Has been updated for a DS re-release, Realms of Revelation, also known as Realms of Reverie for its European release. Like Dragon Quest V: Hand of the Heavenly Bride, this is the first official English translation. It was released in English in February 2011.