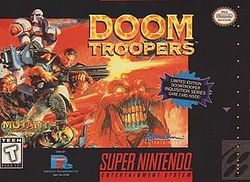 "For the first time, humanity is about to be wiped out by the forces of the Dark Legion."
— Prologue
Advertisement:

The player assumes the role of one of two commandos, the titular Doom Troopers: Capitol trooper Mitch Hunter or Bauhaus trooper Max Steiner, fighting an evil horde of gun-toting zombies, mutants and demons, the Mooks of the Dark Legion, in an effort to stop Algeroth, Dark Apostle of War. The game has a total of eight levels (Though some of these are mere boss arenas) on a number of planets throughout our solar system, most of which have been terraformed and don't really resemble their real-life counterparts.

The game was known for being rather violent, with much gore and mutilation inflicted on enemies by the player. Despite it's "T" rating, it's probably one of the most Gorn filled games released on either system. It's also a rather fun one, at that. Hard, too. Thankfully, you can shoot in eight directions and you are not a One-Hit-Point Wonder. Bring a friend, it has co-op as well.