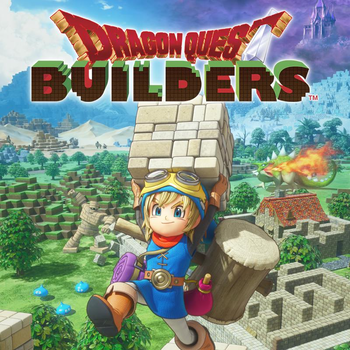 "Build for fun! Build for adventure! Build to save the world!"
— Tag Line
Advertisement:

Dragon Quest Builders is a sandbox action role-playing spin-off of the Dragon Quest series developed and published by Square Enix for the PlayStation 4, PlayStation 3, Play Station Vita, and Nintendo Switch consoles. The game is set in Alefgard, the world of the original Dragon Quest video game, and players control the savior who is tasked with rebuilding the world after it was destroyed by the evil Dragonlord. The game features a voxel aesthetic style, with gathering and building elements. The game was released on the PlayStation platforms in Japan in January 2016, and was followed by a worldwide release in October 2016, with the Nintendo Switch release in February 2018 worldwide. Launched on mobile on March 26th 2022.

A sequel was announced for the Playstation 4 and Nintendo Switch and the global release date was announced to be July 12th of 2019.