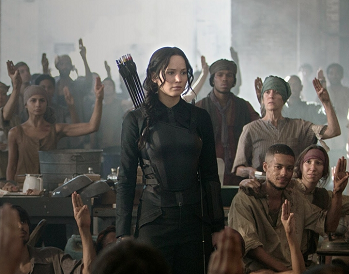 "While you live, the revolution lives."
"When I thought you were dead, I lost hope. I'm telling you. But when you came back? I was ready to believe anything."
— Ashley Williams, Mass Effect 3
Advertisement:

We have two sides of a conflict — The Empire is opposed by La Résistance or just common folks they oppress, The Legions of Hell fight with Church Militants, the Galactic Conqueror is in a war with The Federation, the Multiversal Conqueror fights against the Guardian of the Multiverse, the Scary Dogmatic Aliens are opposed by The Men in Black and Space Marines. And one side has a giant advantage; they win on every front and it's only a matter of time before they utterly annihilate their enemies. This is the Darkest Hour for the weaker side, but fear not, because Hope Springs Eternal.

Then in come these nobodies. Hope Bringers are living proof that one person can make a difference and even the odds. By their actions, they restore hope in the hearts of their allies and lead them into the fight and victory. They can be the Big Good, the Magnificent Bastards, The Chessmasters, The Ace, the Rebel Leader or the People Of Mass Destruction — whatever makes them so special, it works. They can make the two sides not only fight on equal ground again but even reverse the situation and make the side they help repay the other one for everything they did.

The Hope Bringers’ motives may vary. They can help the good guys because they believe in justice, love their fatherland, want revenge, tend to their flock, spread the Good News or just Because Destiny Says So. Often the Hope Bringer is the Chosen One.

Note that this isn't always a good thing, since Hope Is Scary and sometimes leads to a Hope Spot. And occasionally the hope bringer is a Dark Messiah who’s willing to do anything to bring hope — regulations, brainwashing, manufactured reality, whatever.

Compare The Hero, Magnetic Hero, Messianic Archetype, Supporting Leader, and All-Loving Hero. Can be created by Summon Everyman Hero. Contrast with The Dreaded (although, from the villains' perspective, the Hope Bringer may well be The Dreaded), who is defined by how others fear them. The opposite of this trope is Hope Crusher, who delights in despair and destroying any semblances of hope.

After going AWOL to launch a rescue operation of a HYDRA Base; Steve Rogers returns to camp alive: bringing with him the Allied POWs and several of HYDRAs vehicles and armaments.

After going AWOL to launch a rescue operation of a HYDRA Base; Steve Rogers returns to camp alive: bringing with him the Allied POWs and several of HYDRAs vehicles and armaments.