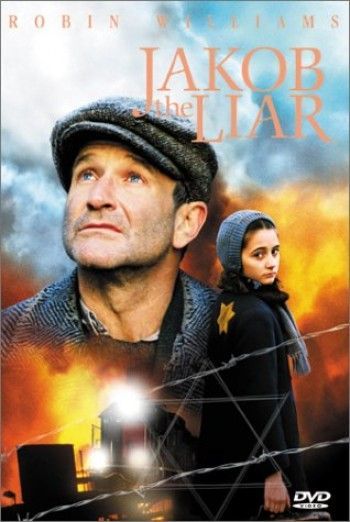 Jakob the Liar is a 1999 film directed by Peter Kassovitz, starring Robin Williams.

It tells the tale of Jakob Heym (Williams), a Jewish shopkeeper in the ghettos during World War II. When he's caught out late one night, Jakob is sent to the Kommandant for being smart with the guard. While there, he hears news of advancing Russian troops. On the way back he finds a girl who managed to escape from a transport train, and begins to look after her. From there he finds himself risking life, limb, and more than a few lies as he tries to keep the spirits of his friends up, and give them the courage to face the next day in hope that the Russians will free them from Nazi occupation.

The story first appeared as a 1969 novel by Jurek Becker, who originally intended it as a screenplay; appropriately, it's been filmed twice. The first movie was an East German-Czechoslovakian film from 1975, Jacob the Liar.