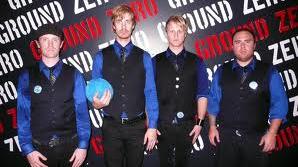 The Megas posing with their mascot.
Since the year 200X (4), The Megas have strived to bring a message from Dr. Light to the people. They have chosen to transmit that message, the tale of a small blue robot named Mega Man, directly into the eardrums of the general populace through the power of rock.
— The Megas' mission statement.

are a Los Angeles-based band well-known for making vocal rock remixes of music from the Mega Man video game series. Unlike The Protomen, a similarly dedicated band, they directly remix songs from the games. The resulting songs generally have a closer feeling to the original work, giving each of the Robot Masters their own personalities as they sing about their lives as Mega Man breaches their defenses, and eventually defeats them.

On August 24, 2009, the band, in conjunction with Entertainment System, released a 4-track EP called Megatainment, based on Mega Man.

On February 5th, 2010, they released "Get Acoustic", a largely acoustic version of Get Equipped, with the "Monsteropolis Orchestra" they created. Most of the songs are slightly slower and more somber, although this is not true universally.

On July 19th, 2010, they released the Sparked A War single, which contained the studio release of You've Sparked A War/Spark Man, a instrumental variation, an acoustic remix, and covers of both Sunglasses at Night by Corey Hart and the Mega Man cartoon theme song, dubbed Super Fighting Robot.

On September 7th, 2016, they released an EP titled "The Belmonts", which they claim was sent to them on a cassette wrapped in parchment, sealed with wax, with the only words within it saying "Release me." It consists of three songs based on songs from the Castlevania series, and was also available in a limited run of 100 blood-red translucent cassettes alongside the digital edition.

On October 31st, 2018 (at the stroke of midnight no less) they released an EP titled "Skulls", which is branded as a collab project between The Megas and The Belmonts. It contains "Cracked Skulls", a cover of Skull Man's theme, a cover of "Burn" by The Cure, and two more Castlevania songs, Wicked Child and Vampire Killer.

On December 17, 2018, they released the single "Chill XMas", featuring a cover of Chill Penguin's theme and a cover of "Blue Christmas."

On March 2, 2020, they released another Megas/Belmonts collab EP, "Snakes", with "Stalker" (a Belmonts song focusing on Queen Medusa) and "Rogumer Storm" (Storm Eagle's theme), as well as a new cover of "Evolution of Circuitry" and a cover of "Yours Truly, 2095" by Electric Light Orchestra.

A short story by Matt Mowrer

depicts the events of The Quick And The Blue. While not necessarily canonical, the story was featured on their website.

Not to be confused with the show Megas XLR.

The work of The Megas contain examples of: