The Dead Rise to Advertise 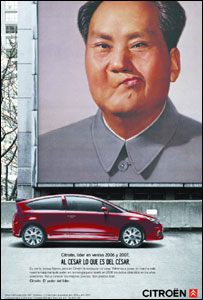 Mao disapproves.
"You celebrities need to realize that the public owns you for life! And after you're dead, you'll all be in commercials dancing with vacuum cleaners."
— Homer Simpson, The Simpsons, "When You Dish Upon a Star" (referring to the Fred Astaire Dirt Devil commercial

This is the controversial practice of resurrecting famous but long-dead celebrities to lend their endorsements to numerous commercial products. Photographs or scenes from their filmed appearances are digitally processed to show them interacting with various products or people hawking those products. These appearances aren't limited to film and TV stars. Historical figures have given their digital support to numerous products and services as well.

The use of dead celebrities' images has diminished over the past decade, especially in North America. This is in part due to the public's growing distaste for the trend, but another influence has been the implementation of inconsistent personality rights laws across the continent that leave advertisers unsure as to whether they need to obtain expensive permission from a dead celebrity's estate to use the deceased's image. Twelve states (and Quebec in Canada) have laws on the books that prohibit the unauthorized use of such images, but the length of time these rights exist after death varies from jurisdiction to jurisdiction, and in most states the use of an image in a "work of art" is excluded - but in most cases nobody has defined whether advertisements are works of art. It's easier just to hire a double.

There have also been ethical and taste concerns raised about digitally resurrecting people who were murdered such as John Lennon and Judith Barsi.

A variation of this is to use historical footage of said celebrities from when they were still alive.