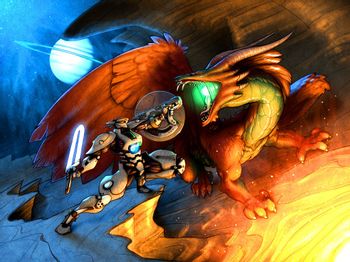 )
Pearl: Fantasy is for babies. It's just a bunch of make-believe fairy tales. Sci-fi, on the other hand, is a thinking-squid's genre. It's about exploring the potential of our universe... based on actual science.
Marina: Space dragons are actual science?
— Splatoon 2
Advertisement:

Robots and wizards, spaceships and dragons, lasers and fireballs. Mix these ingredients in your cyber-witch's boiling pot of dark matter, and you've got yourself Science Fantasy.

Science Fiction and Fantasy stories can be difficult to tell apart under normal circumstances, as all but the very hardest sci-fi introduces some hypothetical technology that one has to take on faith, like FTL Travel or Humanoid Aliens. And at the other end of the scale, even High Fantasy works have consistency requirements like Magic A Is Magic A, which can blur the line into Sufficiently Analyzed Magic.

Science Fantasy works, on the other hand, take traditional Fantasy and Science Fiction tropes and throw them in a blender, purposely creating a setting that has the feel of both. Expect to see a lot of classic Fantasy tropes (e.g. warriors with swords, dragons, wizards, castles, and elves) and a lot of standard Science Fiction tropes (e.g. spaceships, aliens, lasers, scientists, robots, and Time Travel).

In any event, it's bound to include Sufficiently Analyzed Magic, Magitek, Functional Magic, Magic from Technology, Fantasy Aliens, and probably Scientifically Understandable Sorcery. Sometimes, it may contain so much fantasy and science fiction as to be both Fantasy Kitchen Sink and Sci-Fi Kitchen Sink.

It should be noted that some works may slant towards one or the other, yet still contain elements of both. Science Fantasy lies near the middle of a continuum between Science Fiction and Fantasy, so there will naturally be a wide range of works that lie somewhere between "Fantasy with a dash of Sci-Fi" and "Sci-Fi with a smidgen of Fantasy". For an explanation of why the genres are so linked, see the analysis page on Speculative Fiction.

Subtrope of Speculative Fiction, under which all Fantasy and Science Fiction falls. Compare Urban Fantasy, Gaslamp Fantasy, Space Opera, Dungeon Punk, and Planetary Romance. Contrast How Unscientific!, where the mix of genres seems out of place; Magic Versus Science, where both aspects are in a rivalry, and The Magic Versus Technology War, where an in-universe warfare happens between wizards and scientists. Compare and contrast Doing In the Wizard and Doing In the Scientist, which retcons a fantasy element to a sci-fi one and vice versa. Compare and contrast Fantastic Science, where magic operates by logical rules similar to real-world science, and The Spark of Genius, where powers and abilities that operate like fantasy magic are dressed up in scientific trappings.

Science fantasy may also arguably describe character oriented stories where the fantastic elements are very subtle and are common to both science fiction and fantasy. Examples could include Paranormal Romance which just happens to involve Applied Phlebotinum, Time Travel or Artificial Intelligence. Many such stories strive to keep the fantastic elements understated (often in the form of minimal Special Effects) in the interest of focusing on human drama.

Supertrope of Fantasy Aliens and Wizards from Outer Space.

open/close all folders
Anime & Manga
Comic Books
Superhero comic universes in general, such as the ones published by DC and Marvel, don't so much straddle the line as obliterate it, in that ray-guns and magical spells coexist quite comfortably. Superheroes and supervillains tend to have widely-varying explanations for their superpowers, ranging from genetic mutations to outright magic.
Fan Works
Many fanfics will fall into this category, usually crossovers between works on opposite ends of the speculative fiction scale.
Films — Animation
Films — Live-Action
Literature
Live-Action TV
Manhua
Manhwa
Music
Podcasts
Roleplay
Tabletop Games
Toys
Video Games
Visual Novels
Web Animation
Webcomics
Web Original
Web Videos
Western Animation