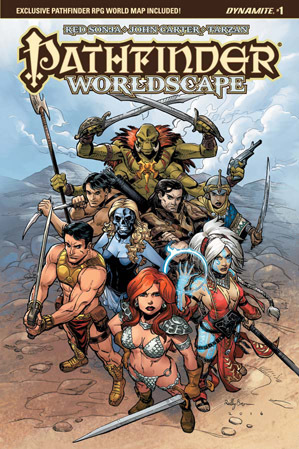 A Massive Multiplayer Crossover event published by Dynamite Comics in 2016 featuring licensed properties under their print including John Carter of Mars, Red Sonja and four Iconics from Pathfinder (Also the main characters of their comic). It features the exploits of four adventurers from Golarion - Valeros, the fighter; Seoni, the sorceress; Kyra, the cleric and Merisiel, the rogue - who are plucked from their world to a mysterious prison dimension called the Worldscape, where the greatest warriors of other worlds such as Golarion, Earth/Hyboria and Barsoom are drawn into an endless struggle for the entertainment of an immortal tyrant. As the four Pathfinders attempt to survive and reunite amid this deadly backdrop, their travels and machinations bring them into contact with other heroes, villains, and monsters plucked from beyond time and space. In time, the heroes become embroiled in a conflict for two powerful magical artifacts—the Scepter and the Crown—that promise control over the Worldscape—and perhaps also escape from it. Gathering both artifacts and punching a hole back to their home worlds will require teamwork and alliance with a rag-tag group of the greatest warriors of three worlds.

The series is written by Erik Mona and the art provided by Jonathan Lau with alternate covers provided by Reilly Brown, Ben Caldwell, Sean Izaakse, and Tom Mandrake. The series ran for 6 issues and each chapter contains character sheets with stats for Earth and Barsoom characters to roleplay with. A second volume was released in late 2017 in hardcover format as an prequel anthology focusing on Red Sonja, John Carter and Tarzan before they met the Pathfinders, as well as iconic anti-hero Seltyiel that also come from their world.

A third volume was released in late 2018 featuring Dejah Thoris, Vampirella, Herbert West the Re-Animator and the Swords of Sorrow reunited as a direct follow up to the series.

This comics features examples of the following tropes: