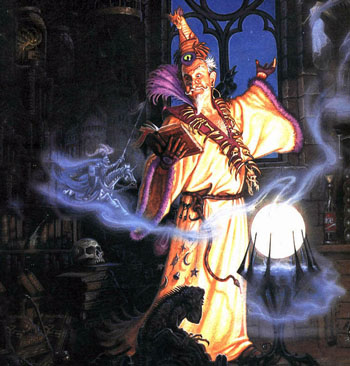 "Wizards are SCHOLARS. And they don't do "magic tricks". They are masters of the arcane arts, able to bend the elements to their will! But you knights have fun hitting each other with pointy metal sticks."
— Marina, Splatoon 2

Those wonderful men and women who command a power beyond mortal understanding. Whether as boon or bane of mankind, a wizard or witch has the supernatural tools and weapons to take on whatever is at hand. And if it's not at hand, they can conjure one up to get it.

Note that this is not Magic by Any Other Name. This is for characters and tropes that use magic and actually call it magic; they don't dance around the issue by claiming it's something other than magic.

Also, this is not about Magic and Powers; it's about the people who use it, and the tropes they end up involved in.