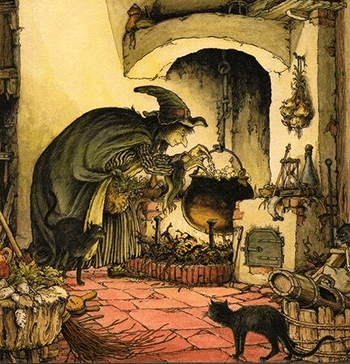 While the term witch itself is often applied as a catch-all word for female magic users in fiction, the witch, as it has evolved out of Western traditions and folklore, has a number of distinct trappings and tropes. While witchcraft beliefs — the folkloric that people work malicious magic on their neighbors — are found in virtually every culture, being absent only in certain hunting and gathering societies and modern industrial ones, the details of the trope as it appears in Western works in almost exclusively derived from Western folklore.

In early western tradition, the witch was predominantly an evil figure. They worked malicious magic with everything from stealing wedding rings to lethal storms at sea and crop destruction, they made a Deal with the Devil (after which, in folklore rather than tales, the Devil did not actually have to do what he had promised them to do to get them to make it), and they extorted things by threats of curses.

In modern media, witches tend to be more neutral or outright good figures. Media that has both often pit them against each other to form a Black-and-White Morality dynamic. Usually, good witches are pretty and bad witches are very ugly, though when an evil witch is beautiful, she's usually a Vain Sorceress. Witches are often shown in contrast to a Wizard Classic, sometimes being rivals or outright enemies, or just often having differences in opinion.

A witch shown in a modern setting, in genres such as Urban Fantasy, tend to forgo a lot of the traditional associations and tropes tied to the Witch Classic, such as the attire and the broom riding, the character often seeing it as "too traditional". A common modern variation is for the witch to ride a vacuum cleaner (or even Roombas) as a joke. They usually acknowledge they are descended from, or taught by, witches in the European tradition.

Subtropes of Witch Classic include:

Other tropes related to witches:

While a Witch Doctor also practices magic, they have nothing to do with the Witch Classic. While sometimes witches are a Mage Species, this is not always, or often the case.