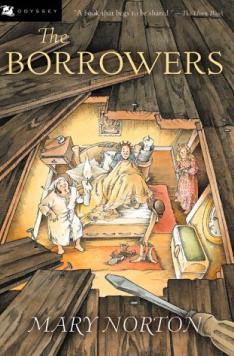 A series of children's fantasy books by Mary Norton (who also wrote Bedknob and Broomstick).
Advertisement:

Arrietty Clock lives with her parents under the floor in the house of a "human bean". They live by "borrowing" from the human beans (it's only "stealing" if you take things from another Borrower), but never anything that might be missed; a Borrower must never be seen by a human bean, or let a human bean in any way know they exist. Unfortunately, Arrietty is a little too curious for her own good, and ends up talking with a human boy. The boy ends up fetching little things that might help the Borrowers, things they couldn't get for themselves.

Arrietty's parents, Pod and Homily, are frightened and upset, but eventually (if somewhat stiffly) accept that the human boy is going to help them and not harm them. However, soon enough the adults see the Borrowers too, so the family hides and has to pack up and leave the house. They head out into the wild — like Bilbo, they're not the adventurous type — and try to make it to a house their relatives moved to years ago.

En route, they encounter Spiller, a loner who says little but sees much. He's a great hunter, and although their initial interaction is cool (as in "not quite frigid"), soon enough they warm to him. (At times it even looks like he and Arrietty might eventually get together, and the fourth novel, Borrowers Aloft, ends with the declaration that they will get married eventually and a fairly detailed description of their future home and life together — but this never happens within the series. The final book introduces the character of Peagreen as another romantic possibility for Arrietty but ends without any romantic resolution.) He helps them out of a couple tight spots, including when they're captured by humans, and eventually even shows them a miniature village they can live in (crafted by a human, but they stay decently hidden so he doesn't see them).

Aside from the first minor "captured by humans" bit, they are captured one major time, when a human husband and wife decide to put the Borrowers on display in a glass house where they will not be allowed any privacy. Luckily, they manage to escape.

An enjoyable series that made for a pretty good couple of adaptations: