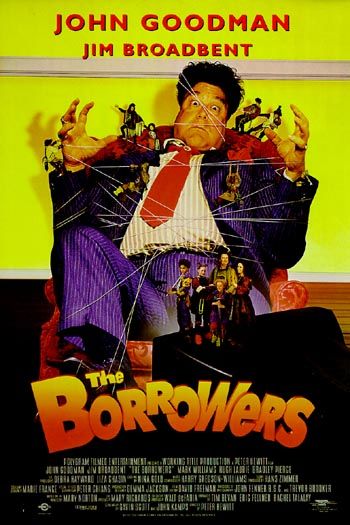 The Borrowers is a 1997 comedy/fantasy film directed by Peter Hewitt, loosely based on the children's book of the same name by Mary Norton. It stars John Goodman as Ocious P. Potter (the Borrowers' main human adversary) and Jim Broadbent as Pod Clock and also features Tom Felton in his film debut as Peagreen Clock.

The four-inch-tall Clock family secretly shares a house with the normal-sized Lender family, "borrowing" such items as thread, safety pins, batteries and scraps of food. However, their peaceful co-existence is disturbed when evil lawyer Ocious P. Potter steals the will granting title to the house, which he plans to demolish in order to build apartments. The Lenders are forced to move, and the Clocks face the risk of being exposed to the normal-sized world.

The film takes a far more urban setup than the book, overturns the idea that the Borrowers have a low population (the ending is rather like that of Toy Story), and in general is not as faithful to the books as the original movies were. It at least avoided being In Name Only by keeping the members of the Clock family more-or-less true to their book characterizations, although even there they recast Peagreen (a minor character in the books) as Arrietty's Annoying Younger Sibling. It also pretty much dropped the original plot in favor of one centering around Potter’s devious plan to demolish the house where the Borrowers live.