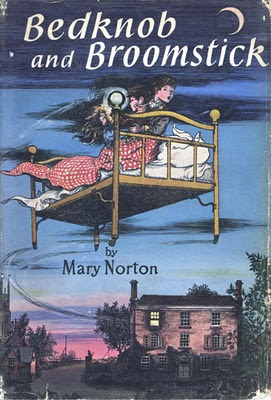 A duology of children's fantasy novels by Mary Norton (who also wrote The Borrowers.)

The individual novels are The Magic Bed Knob; or, How to Become a Witch in Ten Easy Lessons and Bonfires and Broomsticks. They are commonly republished in a single volume as Bedknob and Broomstick.note The spelling of "Bedknob", "Bed Knob" or "Bed-knob" varies by edition; we're sticking with the non-hyphenated spelling here for WikiWord convenience.

The series inspired the Disney film Bedknobs and Broomsticks.

Bedknob and Broomstick provides examples of: