Literature / Beauty: A Retelling of Beauty and the Beast 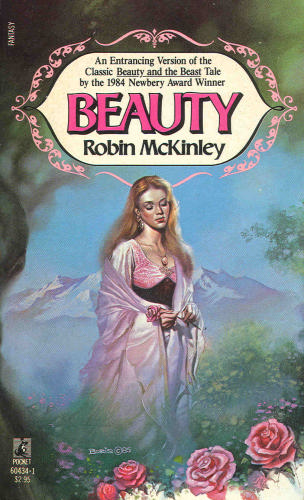 Robin McKinley's first published novel (1976), this is a retelling of "Beauty and the Beast" (in case you didn't catch it in the title). The plot follows the storyline of the original fairy tale fairly closely, with some exceptions: rather than being the more beautiful sister of two unpleasant siblings, Beauty is initially described as quite plain, and her sisters are both lovely and kind.
Advertisement:

Honour "Beauty" Huston is the third of four daughters born to a successful sea merchant, Roderick Huston; her mother, the Lady Marguerite, died giving birth to Beauty's little sister Mercy, who also died. Her two elder sisters are the impossibly beautiful and good-natured Grace and Hope. Though ironically nicknamed for being the plainest of the sisters, Beauty is an excellent student with dreams of possibly being able to attend university.

When Beauty is in her mid-teens, a disaster at sea essentially destroys the family's fortunes. It's a double disaster for the family, because one of the sailors lost in the wreck is Robbie, who is betrothed to the heartbroken Grace. Hope, meanwhile, has fallen in love with a handsome blacksmith named Gervain Woodhouse, and he proposes that the entire family relocate with him to a faraway village, where he and the girls' father can both find work and they can start their lives afresh. They do, and Hope and Gervain marry and become the parents of twins; Beauty meanwhile attains some local fame through ownership of a massive horse called Greatheart, who is utilized to do difficult tasks such as uprooting large tree trunks.

When Beauty is close to twenty, her father hears that one of his ships has been recovered, and makes the journey to town to find out what might be salvaged of their old wealth. On the way home he gets lost in the forest and stays at what turns out to be the magical palace of the Beast. The Beast offers him gracious hospitality, but on his way out, the father picks a rose for Beauty, who had requested rose seeds. The Beast is enraged, but calms when he understands why the rose was picked, and demands one of Mr. Huston's daughters in exchange for his freedom, promising to treat her with every kindness. Beauty volunteers, feeling that she is to blame and also that she can be best spared from home. She and Greatheart take up residence in the Beast's palace, where she befriends the Beast and endeavors to solve the mysteries that surround her.