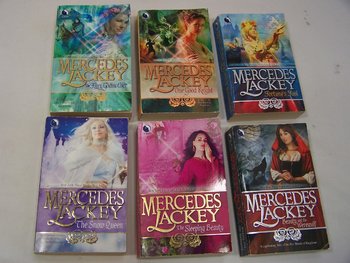 A series of fantasy books with shades of romance by Mercedes Lackey.

The books are set in a realm (the Five Hundred Kingdoms) which operates according to the laws of a Background Magic Field known as the Tradition. When circumstances begin to resemble a plotline from a fairy tale, fable, fireside tale, morality play, or even a bawdy bar song, the Tradition tries to make that narrative play out... no matter how it ends or how the participants might feel about that.

Fortunately, they have allies in the Fairy Godmothers — women in possession of magical power as a result of the Tradition trying to force them into a role that either circumstances or their own personalities made impossible. They use their experience and a moderate touch of magic to minimize the damage the Tradition can do, steering characters out of tales they know will end badly and into ones with a happier ending. Also on the side of Good are the Wizards, Sorcerers, and Sorceresses, who work the larger magics when a Godmother's efforts are not enough; similarly, the Champions take on the physical heroics, epic quests, and the wielding of enchanted blades. Opposing them are Evil Sorcerers/Sorceresses, Wicked Stepmothers, cruel rulers, and all sorts of woe, which the Tradition enables because every story needs a villain.

The books provide a relentless and quite entertaining send up of most of the standard Fairy Tale Tropes, both as they play out straight and as the active figures try to avert or subvert them.

The books in the series are

There is also "A Tangled Web" in the anthology Harvest Moon which is a sequel of sorts to The Sleeping Beauty.