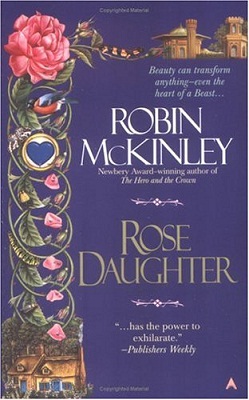 Robin McKinley's second retelling of Beauty and the Beast has much of the same elements of the first one from almost twenty years earlier: a merchant fallen on hard times has three daughters, the youngest one named Beauty, who move to the country and pick up the ways of life there, only to get into a sticky situation with a rose-loving Beast. This retelling, however, places a greater focus on the roses and the magic that surrounds the Beast's castle and ends up with a different feel (and ending, although it's still a Happily Ever After one) than the previous one.
Advertisement:

Beauty has been fascinated with flowers ever since she was young, mainly because a distinctive flowery perfume is the only thing she remembers clearly about her mother. When her family is forced to leave town in disgrace to a country settlement called Rose Cottage, she takes up the job of tending the garden of roses there. However, when the roses she grows draws attention and speculation that she might be a greenwitch, she learns that there might be a dark story behind why no magic seems to be able to take root in the town ever since the previous occupant of Rose Cottage left.

After a hard year where the sisters' tempers run short and Beauty's roses fail to bloom, their father leaves to check out reports of one of his lost merchant ships having been found. The endeavor proves fruitless and the father is bogged down by a snowstorm on the way back home. Fortunately, he finds shelter and hospitality in a magnificent castle; unfortunately, his act of taking a rose with him to fulfill Beauty's wish for one incurs the wrath of the Beast who lives there.

The Beast tells him that he will spare his life if Beauty comes to live in his castle, so Beauty does. She learns that the Beast's rose garden is dying and resolves to bring it back to life; along the way, she meets many creatures, both seemingly ordinary and magical, and gets to know the Beast as more than a terrifying monster - but will it be enough to restore the rose garden? And what of the magic and back story that surrounds and even haunts the Beast?