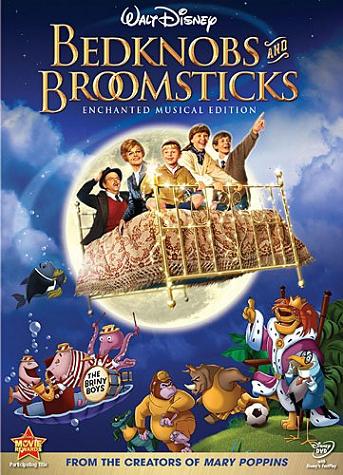 "Treguna Mekoides Trecorum Satis Dee!"
"You must face the age of not believing, doubting everything you ever knew.
Until at last, you start believing there's something wonderful in you!"
Advertisement:

A Disney film from 1971, based on a pair of novels by Mary Norton. The film is often regarded as a Spiritual Successor to Mary Poppins — a live action fantasy musical with a substantial segment incorporating animation, with the same production company, same director, same scriptwriters, same songwriters, one actor in common, etc.

It's August 1940 in the British coastal village of Pepperinge Eye, and among the children evacuated here from the ongoing Battle of Britain are three orphaned siblings: Charlie, Carrie, and Paul. They're reluctantly taken in by Miss Eglantine Price (Angela Lansbury), a spinster who's secretly taking mail-order witchcraft lessons in hopes of being able to aid the war effort with magic. Miss Price doesn't want the kids and the kids don't want Miss Price, so they try to get rid of each other as quickly as possible. But when the children see her flying on a broom at night, they strike a bargain: in exchange for keeping her secret, the children get to live their lives at Miss Price's home any way they like. To seal the deal, Miss Price gives little Paul a transportation spell which enchants the big bed into a magical travelling bed.

When the witchcraft school abruptly closes, leaving Miss Price without the all-important Substitutiary Locomotion spell she needs, she and the children travel to London via bed. They discover the "professor", Emelius Browne (David Tomlinson), is a fraud who was just selling her the pages of an incomplete spellbook. So begins a greater journey, from the market at Portobello Road to the Isle of Naboombu (land of animated Funny Animals), in search of the spell. Once Miss Price learns it, she'll have to use its power to bring inanimate objects to life to save her hometown from none other than Those Wacky Nazis.

Miss Price turns Charlie into a rabbit when he tries to blackmail her.

Miss Price turns Charlie into a rabbit when he tries to blackmail her.